At SIHH 2015, Cartier’s headliner launch was the Replica Clé de Cartier collection, an entirely new family of timepieces whose case design incorporated a key-operated winding crown (Clé is French for “key”). At the upcoming SIHH 2016 in January, Cartier unveils the first skeletonized watch in that collection, which also features Cartier’s first-ever skeletonized automatic movement made in-house. 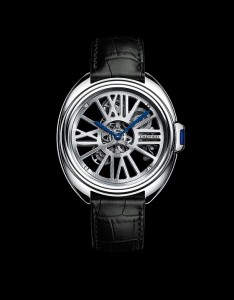 The movement in the Cartier Clé de Cartier Automatic Skeleton (price to be revealed at SIHH) is Cartier’s brand-new Caliber 9612 MC, whose openworked architecture showcases bridges in the shape of Roman numerals III, VI, IX, and XII (marking the 3, 6, 9 and 12 o’clock hour positions, respectively) — a motif that Cartier has used previously in skeletonized versions of its Santos-Dumont, Tank MC, and Astrotourbillon Skeleton watches, the last utilizing only the VI and XII numerals. The difference here is that the movement is self-winding rather than manual-winding. Cartier’s replica watchmakers met the considerable challenge of blending a skeleton structure with an automatic winding mechanism by developing a skeletonized rotor, made of 22k gold, that maintains a delicate balance between thickness and diameter; it is nearly invisible when not in motion, as the periphery of the rotor hugs the edges of the movement. 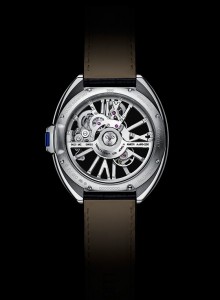 The Replica Cle de Cartier Automatic Skeleton watches is offered in a case of 950/1000 palladium, measuring 41 mm in diameter and 11.45 mm thick. The sword-shaped hour and minute hands are in blued steel, matching the blue sapphire that serves as the “key” in the winding crown. Sapphire crystals in the front and back of the case display the skeletonized movement from both sides. The watch, which is water-resistant to a modest 30 meters, comes on a black alligator strap with a double adjustable folding clasp in 18k white gold.